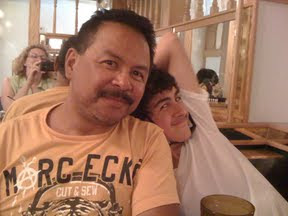 We've now been on the road for over a week and we are headed for our next and final stop before London. All the stops have been pre-planned except the first one (car broke down) and have turnned out ok, some better than others. If you have to stop in Worthington, Minnesota , be sure to stay at the American Inn right off the I90. Very nice for a quick stop. Not 4 star but reasonable rates and recently completely redone.

However, I didn't plan our next stop very well. We are a bit far from Six Flags and Ed is not sure how that will work. We are also worried about leaving the dog for so long. She did fine the other day when we were gone for 8 hrs sightseeing and she'll likely be fine, but she's lost a bit of weight on this trip. She is an old girl after all, 14 - 98 in doggie years! So we're looking into the possibility of a different campground a bit closer. I'm praying.

We were late yesterday. It was a long drive and seemed to take forever. We stopped a couple of times and bemoaned the consequence of arriving so late. We decided to stop for dinner an hour before our destination and it was a great meal. They had wifi which cheered up the boys - and Ed and I - and so we all caught up on Facebook. When we left to go it was dark out and we were tired. I heaved a sigh and got back into the car. As we drove along we were treated with a lovely sight - fireflies dotting the fields around us as we drove. I've never seen so many of them before! It was fascinating! Then we came across a great mystery. There seemed to be dozens of red flashing lights over the fields. We could not figure them out. Very strange. Finally, there were some close enough to the highway and Nathan realized what they were - windmills! Generating electricity!

Much to our delight, the hotel pool was open to midnight. The boys and Ed went down while I enjoyed some time alone! This morning we leave behind Worthington and we're on our way to the Chicago area. Tomorrow Six Flags. God has been very good to using this trip. We're looking forward to see what other blessings he has for us in the next few weeks!


- Posted using BlogPress from my iPhone...how cool is that!?