Make the World Go Away

The last couple of days have been busy for me. It's that time of year that if you're a part of my organization, you're busy raising money to put into your "helping others" fund. So, last night was our annual Church Christmas Dinner and Silent Auction. For two days we were getting ready gathering items to auction from companies around town. Some very nice donations were made - toaster oven, a lovely bike, 1 nights stay in a nice hotel, a favourite restaurant donation dinner for 5 people, beautiful items, pretty things, handmade things - we ended up with a treasure trove of items.

When you get busy like that it can consume you. No time to pay attention to the world, to social media, TV shows get set to record and away you go. You've worked hard and have a wonderful time having a sit down turkey dinner with all the trimmings.

But then when it's all over you realize that while you were busy enjoying yourself people were being massacred on the other side of the world in Paris. 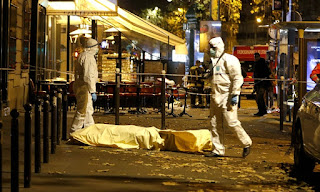 I don't know about you, but I get tired of it. I don't want to be reminded of it. It's not that I don't have any compassion, I do.  Well, I do have a bit of compassion fatigue but I had enough left to colour my Facebook profile picture the flag colours for France, I posted a couple of helpful memes and commented on and liked the appropriate links and posts. I even put mention of it into my sermon for Sunday.

Then I came across a post that showed me up for what I am sometimes - a person of privilege and ignorant about what's really going on in the world:


It is not Paris we should pray for, it is the world.
It is a world in which Beirut, reeling from bombings two days before Paris,
is not covered in the press.
A world in which a bomb goes off
at a funeral in Baghdad
and not one persons status says, "Baghdad,"
because not one white person died in that fire.
Pray for the world
that blames a refugee crisis for a terrorist attack.
That does not pause to deferentiate between the attacker
and the person running from the very same thing you are.
Pray for a world
where people walking across countries
for months, their only belongings on their backs,
are told they have no place to go.
Say a prayer for Paris, by all means,
but pray more for the world that does not have a prayer,
for those who no longer have a home to defend.
For a world that is falling apart in all corners
and not simply in the cafes and towers we find so familiar.
karunaezara on instagram 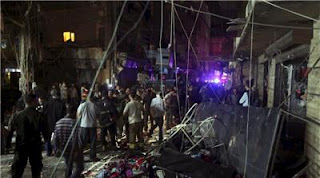 Now, I know all these things are happening around the world, but I just feel so helpless about it all. It's like Rwanda all over again - not the incident, but the feeling of hopelessness as we watch it happen and no one intervenes.

I want to run away because I want to fix it. I want to do something about it - but I don't know what that something is. Do we fight them, like a war? Wasn't declaring war and bombing the heck out of the middle east start this in the first place? (It likely started way before that, but that's another subject all together.) Should we then just leave them alone and let them get on with their war?

I don't know the answer. It makes me want to ignore it, escape somewhere without social media or television's 24 hour news cycle.

But I know it's not really the answer.

I can pray. That's all I can do. It's likely the best thing I can do.

Oh Lord, show me what to do after I pray.