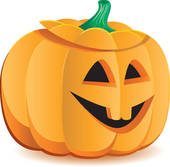 Halloween! I loved dressing up in elaborate costumes, smelling the crisp yet earthy air from the fallen leaves, running from house to house... and oh yes! The Candy!  But Halloween is hard for some Christians - they just don't know what to do with it. Is it sinful and evil?  Is it all about Satan-worship and pagan gods?  Or is it just fun and games?  Years ago, when I got serious about my relationship with God I wanted to make sure that if I participated in Halloween I wasn't breaking some kind of spiritual law.  So I did some research.  Here's what I found.
Halloween can be traced back to the ancient Celtic feast of Samhain (pronounced sah-ween).  Although it's all about the candy now, it had some eerie beginnings.  Originally it was a night for the druids to lead the people in a celebration of Samhain, whom they believed to be the Lord of the Dead.  His festival fell on November 1st.  Most pagan nations had a belief that at death the souls of good people were taken by good spirits and carried off to paradise, but the souls of wicked people were left to wander the space between the earth and the moon or consigned to inhabit animals.  On Samhain, the veil between the physical world and the spirit world was pierced, releasing evil spirits that would then harass the living.  These wicked souls would return to their homes, so people would attempt to ward them off by wearing scary costumes.  They would draw gargoyles on their homes, carve out gourds and pumpkins and put lights in them.  They even tried to placate the evil spirits by offering them food and would leave fruits, vegetables and other types of foods for them.  However, if the spirits weren't satisfied, they would play a trick on them. Hence, trick or treat!

When Christianity spread through Europe and the British Isles, many pagans and druids converted to Christianity. However, they were still very superstitious. Many of the people were illiterate and uneducated and so their understanding of many things was very primitive.  Even if they could read, the Bible was written in Latin and usually only the rich nobles or church officials would be able to read it.  In order to combat this type of superstition, the church established a rival celebration - All Saints Day which is celebrated on November 1st.  All saints day celebrated and honoured all the saints, or martyrs, who had died that year.  The evening before the church would hold a mass and the mass became known as All Hallow Mas, and the evening became known as All Hallow E'en (Halloween).  So Halloween means Holy Evening.
So, Halloween is the churches attempt to redeem a pagan celebration.  This is nothing new for the Church - Christmas and Easter are also celebrations established at the same time as pagan celebrations.  So what is so evil about Halloween?  Well, those who do not believe in Christianity simply practice it as a cultural festival - a night to dress up and have some fun.  Others, have embraced a pagan like religious belief and have resurrected some of what they think are ancient Celtic practices. Even still there are others who have embraced evil and have declared it their special night.
So what do we do with Halloween?  Well, we've been having fun with it all our lives.  We take the opportunity to go door to door with our kids, meeting our neighbours and saying God bless you.  Some people give out gospel tracts. We've never really done that, but we do believe we are to take God's light into our community.

Some see harm in participating.  That's OK.  Everyone is entitled to their beliefs and Romans 14:1-8 tell us not to judge others if something causes them to stumble. So we don't judge, we say do what you feel comfortable with, whether or not you participate in Halloween.
If you're out with your kids tonight, I pray you'll stay safe.  Enjoy your time as a family and with your friends and neighbours.  And don't eat too much candy, it's not good for you! Blessings on you!
grace...Kathie