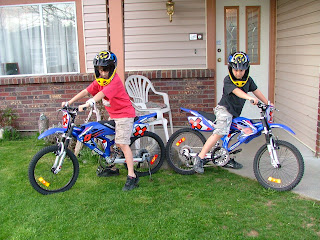 It was about time. The boys have grown and the last bike we bought for Nathan was when he was four. He's nine now and who can blame him for not wanting to face the summer at camp with a too small bike? Evan, well he's never had a new bike - only hand me downs, which is not a bad thing - his last one was built by one of our clients at the centre. Anyway, it was time to go shopping. We got a great deal at Canadian Tire from Ed's Rotary buddy, who could resist. The price was right and the bikes were so cool. I even couldn't resist and got myself a 6 speed Raleigh with a comfortable seat. I was so excited, I've already been out with the boys tearing up the neighbourhood. 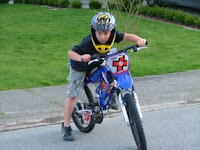 The boys really like their bikes. Evan is so funny. He is real scattered as he rides along, not noticing where on the road he is. Last year he scared the heck out of one of the neighbours by riding out in front of her car. She came to the door all shook up at the fact that she had such a near miss. Evan lost privileges that time. He's still all over the place, so it's going to take some time to get him in line. But he is enjoying himself and with his toothless expression, lisping away, he begins to relate the most fascinating tales of bike phenomenon. 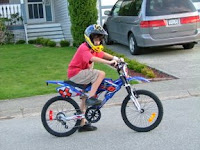 Nathan is a serious biker. He was fascinated last year when we were at the PNE watching the BMX races and stunt bikes. I'm not too afraid that he'll kill himself, but he is the kind of kid that really likes to do well at what he attempts. The serious kind. The dedicated type. Even though the bike just fits him now, he claims that a bike thats bigger won't work for him because it is the bmx style that he's really keen on. So hopefully, he'll not grow too much in the next year or two.
Well, bike time conjures up so many lovely memories for me - riding around and around the block impressing my parents with my various skills - look, no hands. Look no feet. OH NO! Crash! Yep, right into a parked car, head first over the handle bars, smack dab onto the hood of the car. No bike helmet in those days - can't believe I survived childhood. Hopefully, I'll be a bit more careful on this new bike. I know one thing for sure, it beats 20 minutes on a stationary bike in a smelly gym, staring at the same spot on the wall. This way we have the wind in our hair and the smell of the grass, trees and freshly bloomed blossoms, along the dikes, through the country roads - a glorious experience and a darn good cardio workout.
Here's to lost pounds!
grace...Kathie