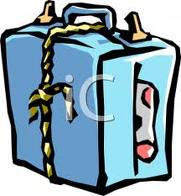 All my bags are packed; I’m ready to go….well, not quite - and not on a jet plane. But, after 14 years in Maple Ridge, 17 years in Metro Vancouver, the Chiu family is moving.  Well, not quite the whole Chiu family – our three grown children, two son-in-laws and our eight grandchildren will stay here where they’ve made lives for themselves.  When Ed and I and our two youngest make our way east it will be the first time our family will be separated.
Ok, so let’s not talk about that right now….
This has been a long journey for us to this point. As Salvation Army officers we have always known that one day we would be moved to another appointment.  It’s just the way it goes. People retire, new officers are commissioned, ill health and other reasons force people to resign and appointments have to be filled.  So every year the grand shuffle takes place.  For 14 years we’ve managed to avoid being caught up in that shuffle.  We’ve had some very sensitive leaders that have listened carefully to us when family situations, poor health and aging parents dictated that it would be best to stay. We’ve been blessed to have these leaders and are very aware that this has been a tremendous privilege.
Our ministry here in Maple Ridge has also greatly benefited from us being here for so long.  When we arrived in 1997 there was a small, newly planted church that was struggling financially and only allowed to stay open I’m sure because of a lease agreement that was pretty expensive.  However, God had plans for The Salvation Army in Maple Ridge and today there is a thriving church and social ministry where people find salvation and new life every week.
But now it’s time for a new adventure.  I’ve not been able to bring myself to write about this move even though I’ve known we were going to move for several months. Perhaps if I didn’t write about it, it wouldn’t happen.
I guess that didn’t work.  So I guess I’ll write now.
grace…kathie