Skip to main content
June 19, 2006
Well, it's been a couple of weeks since I posted - I'm told that people are looking at my blog and wondering where I am. Well, I'm here, but totally wrapped up in different things. When I get home in the evenings I'm so tired, I find it hard to sit up and write such inspired stuff! I should take a break at work and post from there -ooops! What was I thinking - unofficial use of an SA computer! LOL

Anyway, it's been a difficult week. I had another migraine headache. I've never really had these before, but in the last few months I've had a few. It is so debilitating to have one of these headaches. It started on Tuesday night after we got home from the movies and finally subsided completely yesterday (Sunday!). I went to work on Wednesday and Thursday - which was a totally stupid thing to do, however, I kept thinking, "It won't last, I'll just take a couple of tylenol or an advil or both." But it stayed, got worse, just awful. I tried the chiropractor, tried the dr who gave me something really strong. That helped for a while, but it just kept going after the drug wore off. Whew! Whatever triggered it, I hope it doesn't happen again.

Yesterday was Father's day and all the kids came over with their kids. Ed went to the park with some of them and they took some pictures. Here are a few. 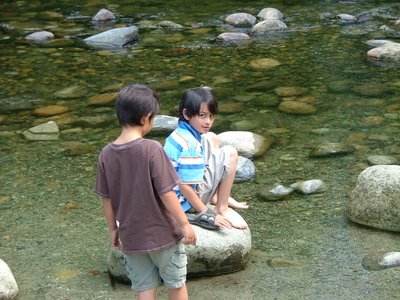 Nathan & Evan at the Alouette River 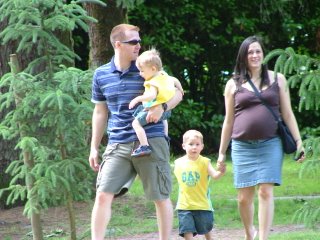 Sheena & Mike arrive with Hosea & Isaac - just wish that new baby would too! 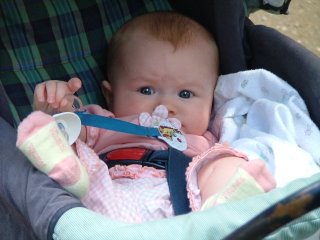 Sydney just hung around in the buggy!